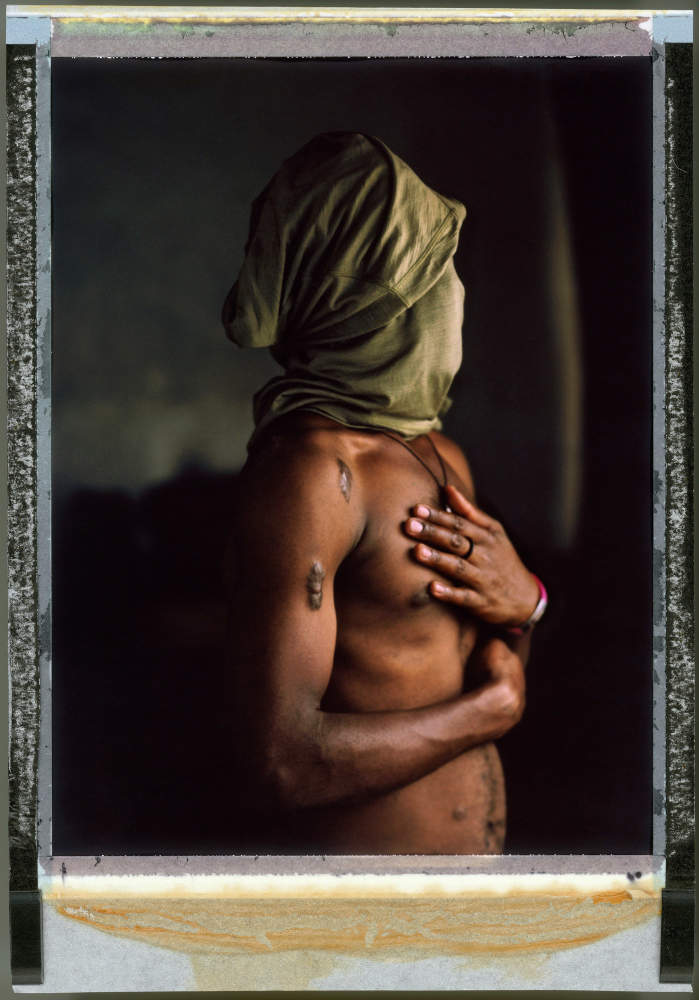 
22 year old gay man Simon describes being attacked by the people in his village.

Simon says the neighbour went to the police station telling the entire neighbourhood, as he went, what he suspected was going on in Simon’s room. The police arrived with a large number of the community. They forced open the door.

“Police found us all naked and threw all of us out thus handcuffing us. Immediately the mob started beating us with stones and sticks with nails saying that we were curses and needed to be killed. Later alone police took us away through the whole village naked dragging us in stones which pierced our bodies thus causing severe bleeding.”

“No first aid was given to us and the police threw us in the cells. They told inmates that we were gay, the inmates started beating us until sleep took them over. I thank God that I didn’t die because the pain was too much. On the next day at 10 am we were taken to hospital since we were in a critical condition.”

“When we reached the hospital, the doctor who came to work on us was my former boyfriend who felt pity for me. At 12am when the doctor was leaving work he told me and my boyfriend that he was not going to lock the back door and if any of us has the strength can escape and run away. He gave us pain killers to use on or way.”

Simon and his boyfriend separated hoping they would have more chance of escape alone. Simon fled to the Ugandan capital Kampala. He has not seen his boyfriend since. 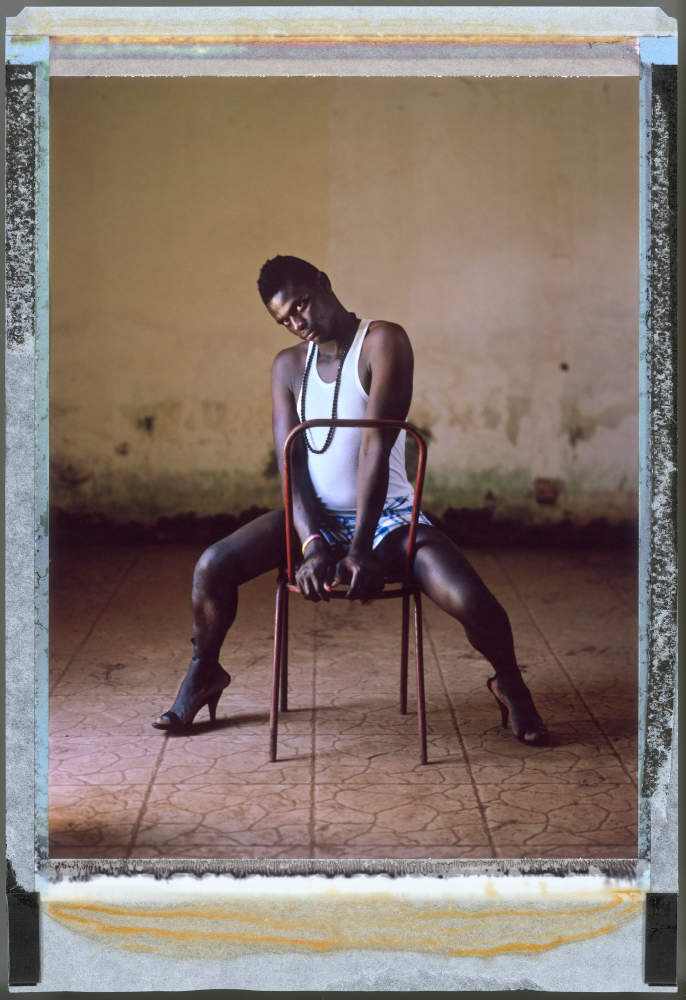 In early 2014 he and his friend were evicted by their landlord and severely beaten by members of the local community. The police intervened and both were arrested and charged with ‘Homosexuality’. They spent seven months in prison awaiting trial. “We were taken to prison and we had hard life. We were beaten, forced to do hard work” says Rihana.

They complain that they are still continuously harassed by the police. 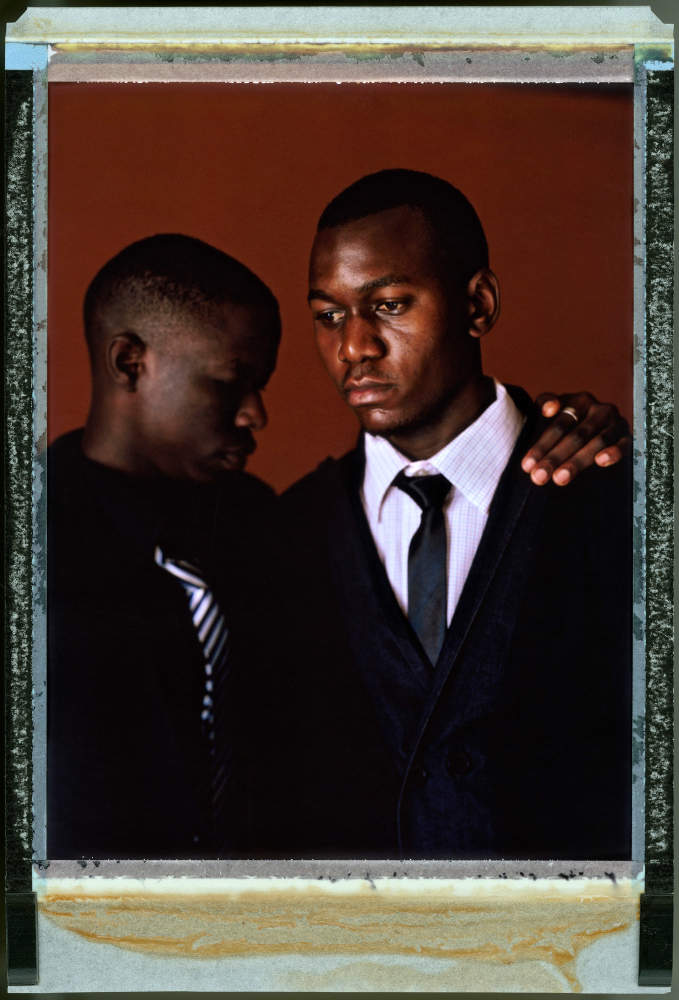 
25 year old Miiro (left) and 21 year old Imran (right, not his real name), a gay couple living together in Uganda.

Miiro describes their eviction from their home because, he says, of them being gay. “We heard people stoning the door and windows while shouting, telling us to immediately leave the house because they were tired of us, claiming that we are curse to the village, and even to the teenagers in the village… After a while of storming the door, it broke and we were pulled out, thrown on the ground, beaten and flogged for almost an hour. We were half dead. And they burned all things in the house in the process. The leader of the village intervened and they decided to take us to the police station for life imprisonment.”

Miiro spent four days in police cells before being released upon intervention of human rights lawyers. He went into hiding for two and a half months. He received USD 160 relocation money from a non-governmental organisation but he says it wasn’t enough to start a new life.

Even before their eviction though, life as gay men in Uganda was not easy. He has faced constant persecution because of his sexuality. He describes being ‘outed’ at school, and the moment his mother found out.

“She didn’t even have to listen to what I had to say, she told me I was a disgrace and I wasn’t worthy being her son, she went ahead to disowning me there and then in front of the entire school and its staff and that I would rather be dead than having me alive as gay.”

“She then walked away and left me on my knees begging for her at least listen to what I have to say, the head teacher then asked me to leave his school, I left school while being mocked , laughed at, on that day hated myself to the extreme I felt I wasn’t worthy living, where was I to start from? How when the only person I trusted in the world turned her back on me? And this was the beginning of my suffering.” 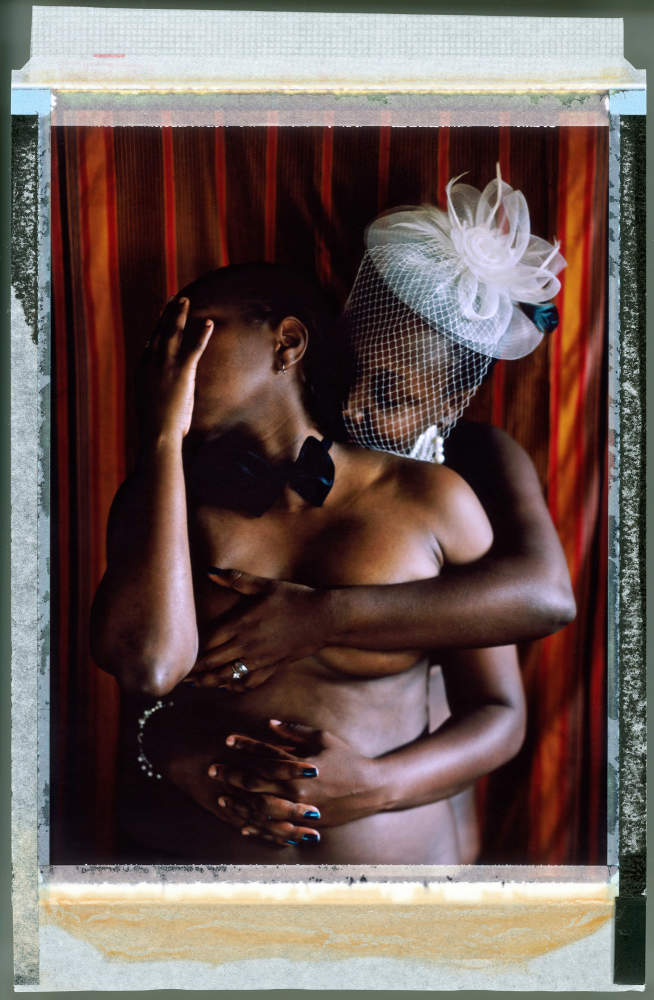 
‘J’ and ‘Q’ are too afraid to reveal their identities.

They describe the circumstances they find themselves in: “(We) are a lesbian married couple though not recognised because in Uganda society lesbianism is an abnormality, an outcast, a disease that needs to be cured… We have been attacked verbally by people (men) who have noticed we are a couple… [they say] ‘you need to be raped to rid of your stupidity of liking a fellow girl'”

“We can’t publicly say we are married especially since the bill had been passed and thus caused more awareness and polluted very many Ugandans minds against the LGBTIQ community which has also made living in Uganda as a lesbian a dangerous thing.” 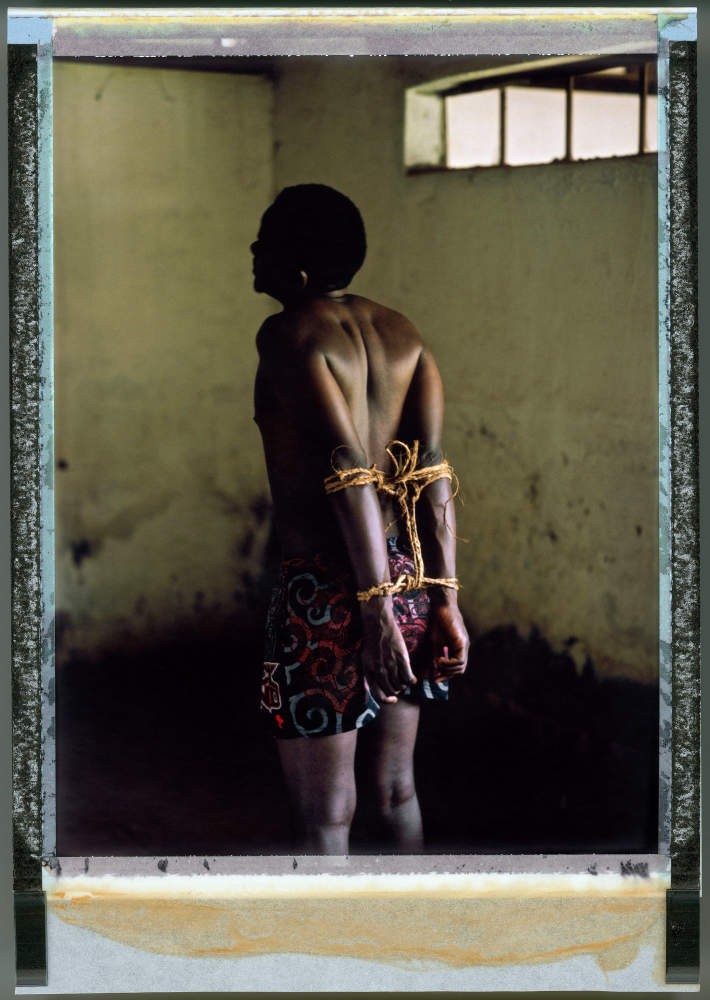 He lists the discrimination he has faced: “In 2010 I was chased from school when they found out that I was in relationship with fellow male student. I was also disowned by my family because of my sexual orientation. I left home with no option but to do sex work for survival and fight for our gay and sex workers’ rights because I was working on the streets.”

“I can’t forget when I was raped in the police cell by prisoners. After all that I decided to start an organisation with some campus students, an msm organisation called Kampuss Liberty Uganda. During the petitioning of the anti-homosexuality act I appeared on local televisions so much and it became hard to me to a permanent place to stay because the majorities are homophobic.”

“I also appeared in local newspapers as a promoter of homosexuals so right now it’s hard for me to get a safe place to rent yet I am not working. I was fired from work because I am gay.” 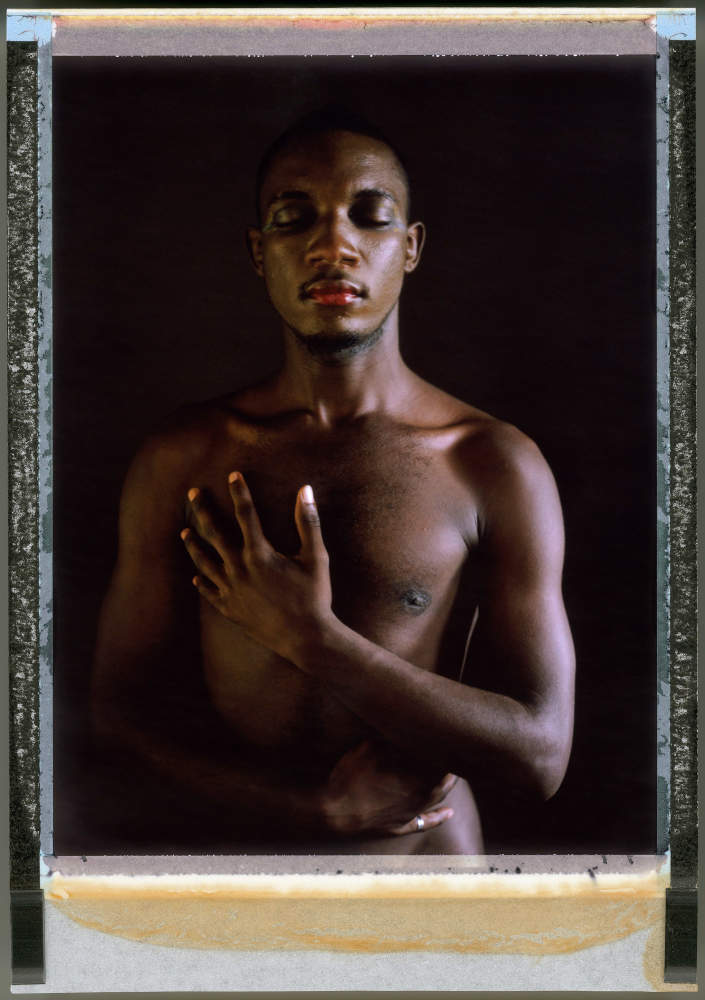 
23 year old Raymond is a trans-woman and sex worker in Kampala.

“In my childhood I used to play with dolls, some boys nicknamed me girl boy. One time some boys undressed me to see if am a boy or a girl and I felt so small. I went to tell my auntie about what the boys did and said that I deserved it. It pained me so much whereby she just supported them.”

“Due to behaving like a girl, my auntie who I was living with didn’t allow me to stay with their kids. She made me stay in a chicken hut for three years. I used to think that I am abnormal because people used to say that who practices this is a homosexual and such people are cursed. I prayed a lot to myself and had to fast but nothing could change.”

“Things worsened when my face appeared in newspaper on the front page. I started receiving phone calls threatening me from different corners that they are going to kill me and my landlord threw me out that he doesn’t entertain gay people.” 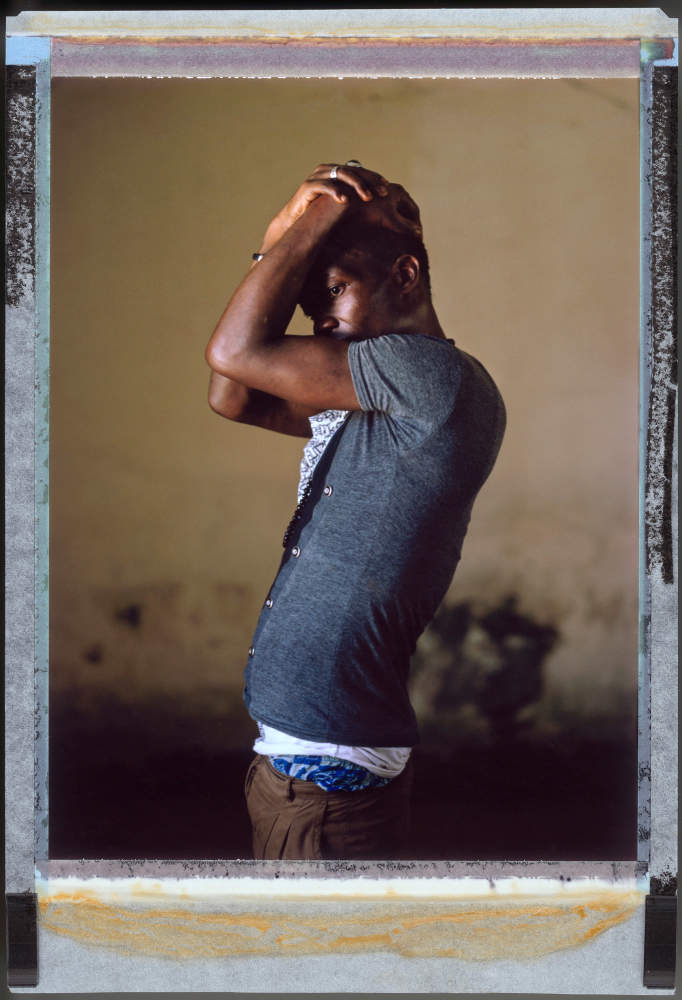 In early 2014 he was evicted by his landlord and severely beaten by members of the local community. In this photo he demonstrates how he covered his head as the community rained blows on him.

The police intervened and he was arrested and charged with ‘Homosexuality’. He spent seven months in prison awaiting trial. “We were taken to prison and we had hard life e.g. we were beaten, forced to do hard work.” He complains that he continuously harassed by the police.